Does anyone actually like airline food? I’ve seen documentaries examining the science behind mile high cuisine – but I’ve yet to find anyone actually congratulating the chef for his work. It’s a means to an end. Usually an end towards the back end of a flight. You get the picture.

There are much better pictures to be had from airline windows these days, thanks to the advanced technology of smart phones. This one wasn’t quite in focus, but it summed up the stunning approach to Chicago pretty well.

In recent years I’ve made the most of airport shuttle services. The shared van is a good halfway house between the expense of a cab and the perils of a public transport system. And in the main it’s worked well. But what I hadn’t accounted for was the arrival of international triathletes in town, all with the same idea as me. Seriously, if you’ve ever sneered at someone for having a large suitcase, you should check this lot out. Bike in cases. And, of course, they all have to fit in the same van.

Downtown Chicago seems surprisingly familiar. Maybe it’s because I’ve done lots of research in advance, but as so as I arrive at the Westin Hotel – and step outside – I feel at home. I’ve no idea why. It’s a warm evening, with temperatures still well above 20 Celsius, thankfully tempered by a breeze from Lake Michigan.

Like man American cities, Chicago is a real melting pot. There are Chinese, Mexican, Swedish and Ukranian communities in the mix. So it seems inevitable that I should start my own visit with a check on my Irish roots. 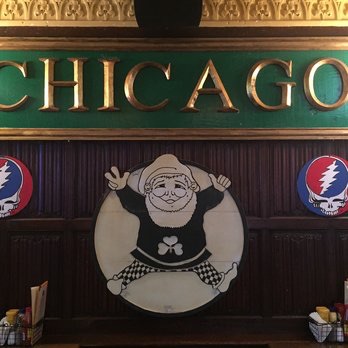 Butch Maguire’s sits along a strip of downtown bars on West Division Street. There are several Celtic-themed holstelries here, and if you were around in the 80s the most famous is Mother’s, featured as the unlikely backdrop to Rob Lowe and Demi Moore’s romance in About Last Night.

It’s often frowned upon for Brits to attend Irish bars abroad, but Chicago has a proud Irish tradition. And a population so big, it has two St Patrick’s Day parades. So it’s apt that I’m served by a Patrick, who asks all new customers their name. It’s just a small gesture – but unlike that adopted by a certain coffee chain, the personal thing here is genuinely met. For a downtown bar that looks like any other, Butch Maguire’s attracts a healthy local crowd.

By the end of the evening, I’ve got some live music tips from Tina, a review of Shakespeare’s Globe by Rafael and a whole list of other bars to visit from Patrick. Not a bad way to beat jet lag.