These days, I consider Heathrow as something of ritual rather than an adventure. I’ve learned most of the secrets – never pay for your travel within the perimeter road, always opt for a village pub rather than the hotel restaurant. It’s less about saving money and more about indulging in secret information that isn’t really secret at all.

One of the worst kept secrets of recent months has been the Great Boarding Pass Scandal. Airport retailers have been claiming it a legal requirement to show your boarding pass for purchases once airside, and then recovering the VAT because they’re technically trading outside the EU.

It’s not exactly a rip of for passengers, but my view is that these companies make millions out of their captive audience without exploiting a tax loophole. So I was surprised to be asked at a well known electrical retailer to show my boarding pass because “It’s a legal requirement for me to ask”. 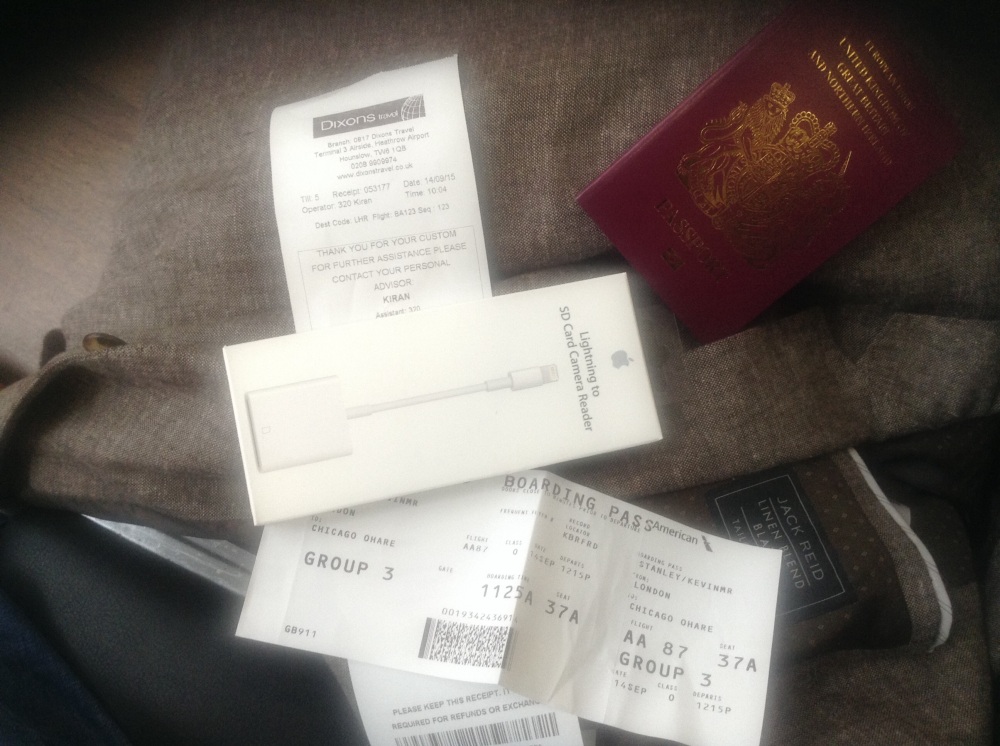 It’s no small irony that the purchase of a connecting cable so I could show you this photo (and others on my travels). But whose law states that the retail assistant must ask passengers for a document which simply increases that company’s profits?

For this trip, I’m also doing something I’ve never done before : relying almost entirely on a credit card for spending. I’ve always been wary of using cards abroad because of the many and varied fees applied for making purchases, exchanging currency and, sometimes, simply paying for a coffee. The charges quickly add up. But – like anything else in life – shopping around can reap benefits. I now have a a card that carries no charges or fees for international transactions, and a relatively low interest rate. It’ll be interesting to see if I save anything compared with using good old cash.

Heathrow’s Terminal 3 is by no means the nicest place to start an adventure. But this is where American Airlines flies from, and today the destination is Chicago. Yesterday I stayed in my new favourite airport hotel destination – the picturesque perimeter village of Longford. With two traditional pubs and lots of accommodation, it’s a great way to prepare for a a long flight. But perhaps not for much longer.

Posters and stickers adorn the streets declaring “No To Heathrow Expansion”. If a third runway is built, it’ll flatten Longford. Many of its residents rely on or benefit from the airport, yet its very existence is threatened because of demand for more capacity.

Just imagine how many boarding passes that would equate to.