If God had painted his own canvas, he’d have been hard pressed to come up with something as beautiful as Dibrovnik’s Old Town on a Sunday afternoon.

I realise that this is a pretty bold statement to make, but it’s a wondrous feast for the eyes. Look up, forwards, downwards, it’s all good. And it all starts at Stradun, the Main Street leading from West to East – a polished pavement of architectural beauty, made tacky by tourism. 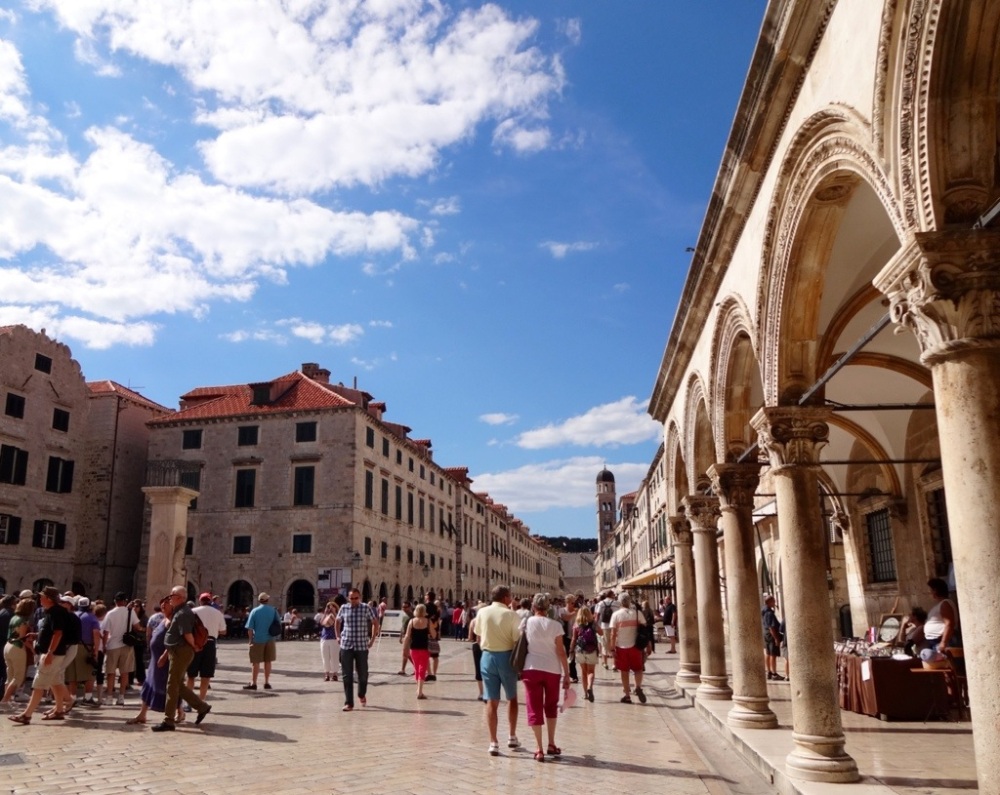 You see, just like God, quite a few people seem to have heard of Dubrovnik. So if you’re coming here, be prepared to take your time. Quite a long time, in fact, as you share the crowded streets with slow moving people from all corners of the world. In the air are accents and words from Australia, Germany, Italy (lots of Italians as it goes) and the Far East. The squares are filled with restauranters and stall holders making Kuna while the sun shines.

The Kuna, incidentally, is the local currency. Despite joining the EU earlier this year, nobody has adopted the Euro. Which in my experience is a good thing for the pocket. I remember the shock of visiting Ireland the year after the Euro came into widespread use – a very generous exchange rate for the former Irish Punt had turned into a nasty surprise at the bar.

And so Stradun turns into Stara Luka – the Old Port. And a prettier setting you couldn’t wish for. 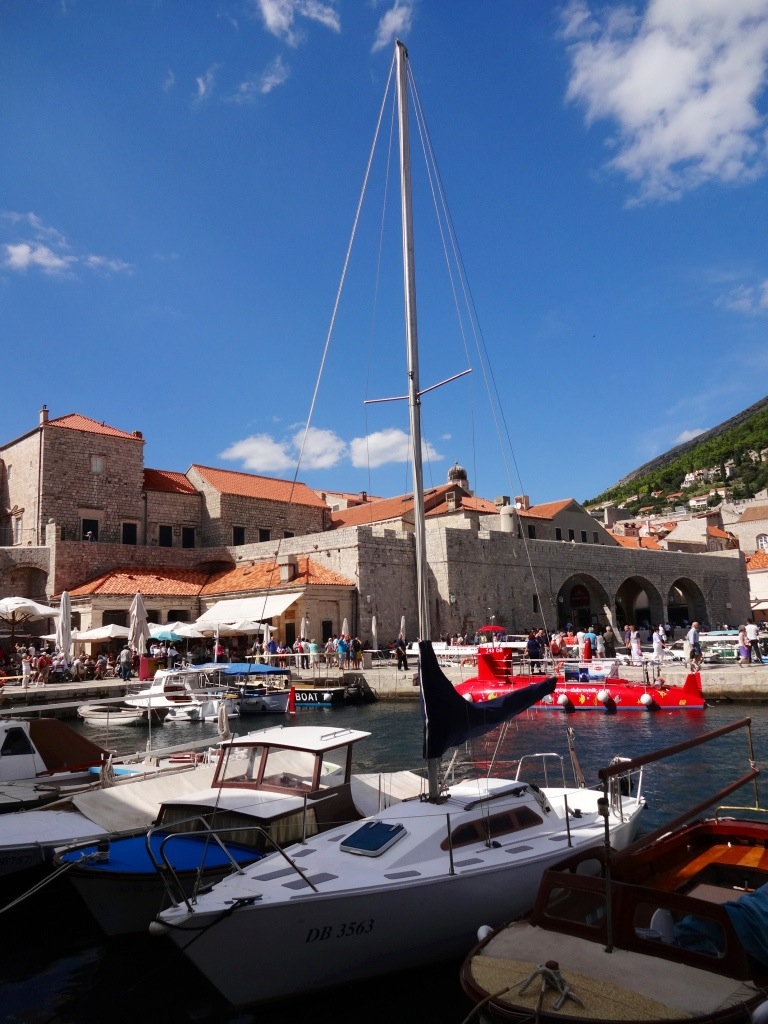 The ambiance is mixed with some fairly frequent, but gentle, sales pitches from people selling tickets for the dozens of boat trips that go from here. Around some of the restaurant tables, I see salesmen talking tourists into what may or may not be a good deal. The advantage of staying in the Old Town itself is that I’m under no pressure to make a quick decision.

The Luck Of The Irish

The great thing about visiting new places is learning about the culture, a different way of life. Sampling things you’ve never seen before. Or alternatively, you could visit Dubrovnik’s Celtic Quarter. 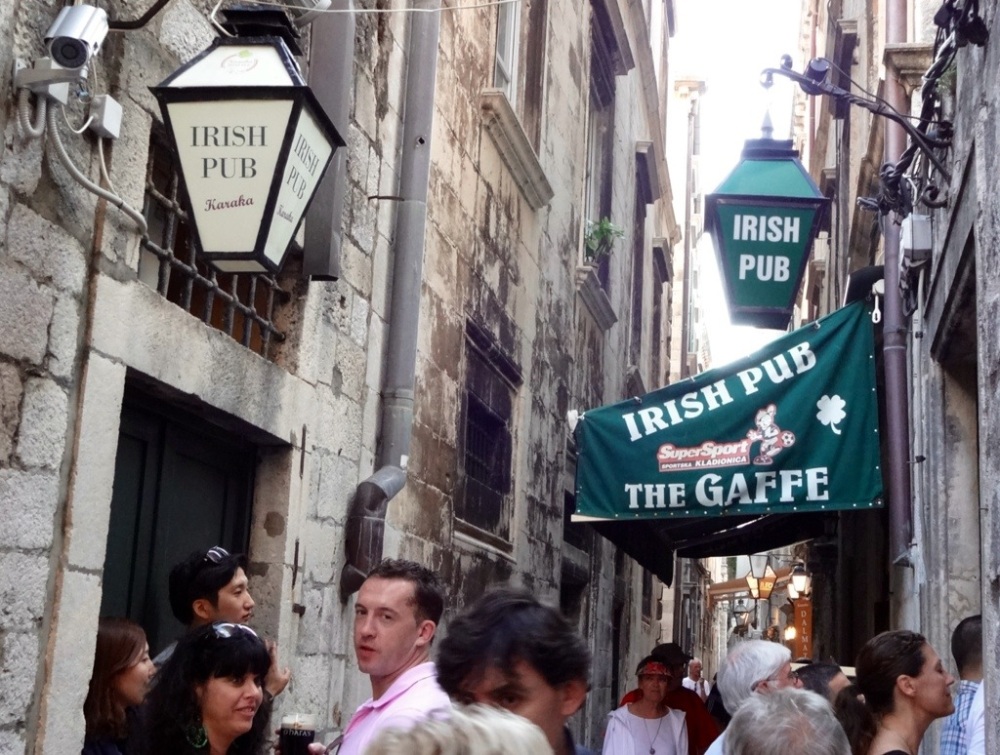 This is the kind of bar I usually hate. But today is different, because it’s the GAA Final between Dublin and Mayo. For the uninitiated, this is a cross between football, rugby and fighting – in no particular order. And the satellite TV feed of RTE’s coverage is enhanced by the presence of a wedding party, who appear to be evenly split between the competing sides. Much chanting and various expletives follow until Dublin are declared the champions by a single point.

Then the sun goes down and Stradun suddenly takes on a whole new character. 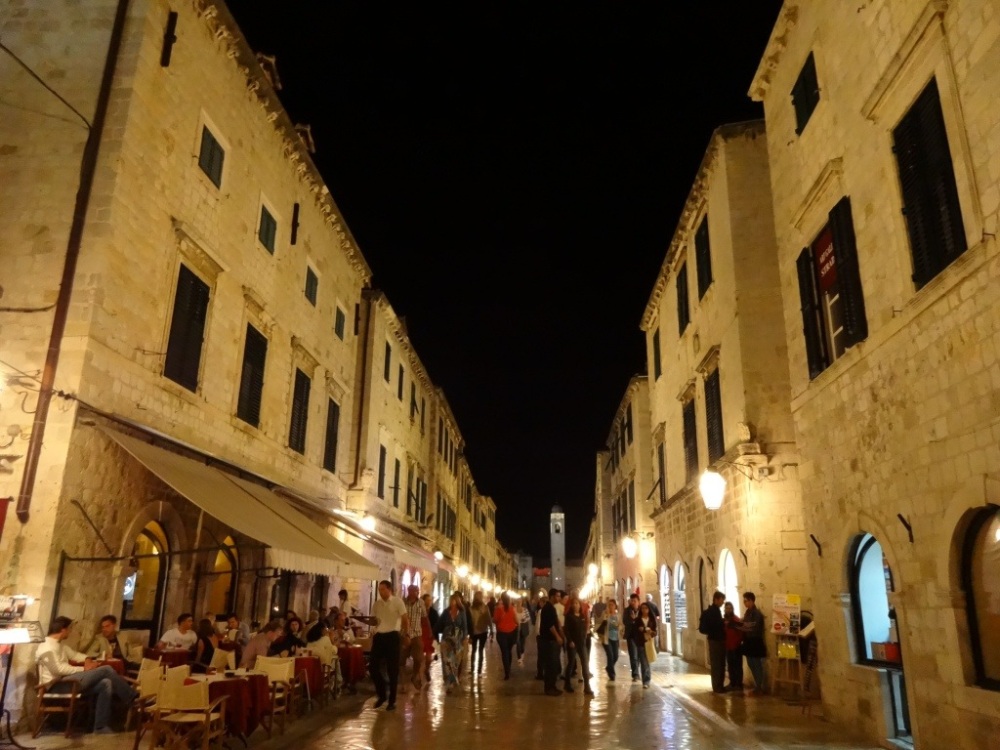 This looks classy, and from the second floor window of the Divine Apartments, even NewsMutt can’t quite work out what to do next.

This air of sophistication is soon diffused by a visit to the Exit Bar. Described as a “rocker’s meeting place”, I soon hook up with Tomasz and Eva, a Polish couple from Manchester. They’re touring Croatia and currently sleeping in their car, with a view to camping somewhere. 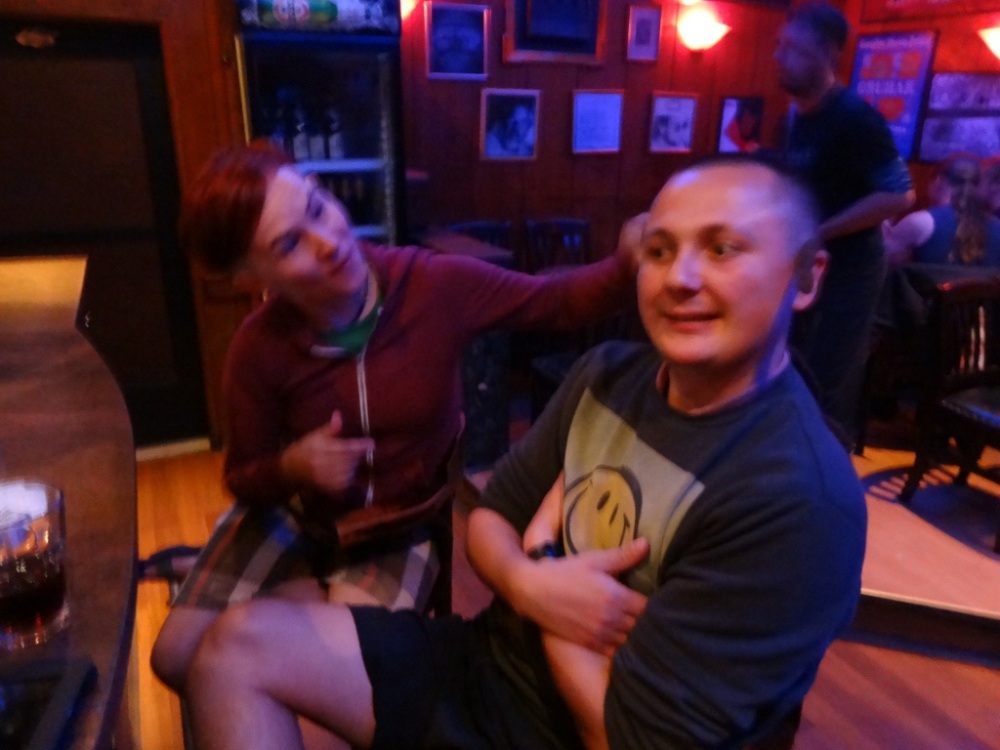 I’m equally pleased to see that Tomasz is a bit of a techno geek, and seasoned traveller too. He shows me his holiday snaps of boring places, like Madagascar and Jamaica. I’m not at all jealous. Then, fires up an app on his iPad, and suddenly he’s talking to his dad. From a rock bar. As you do. 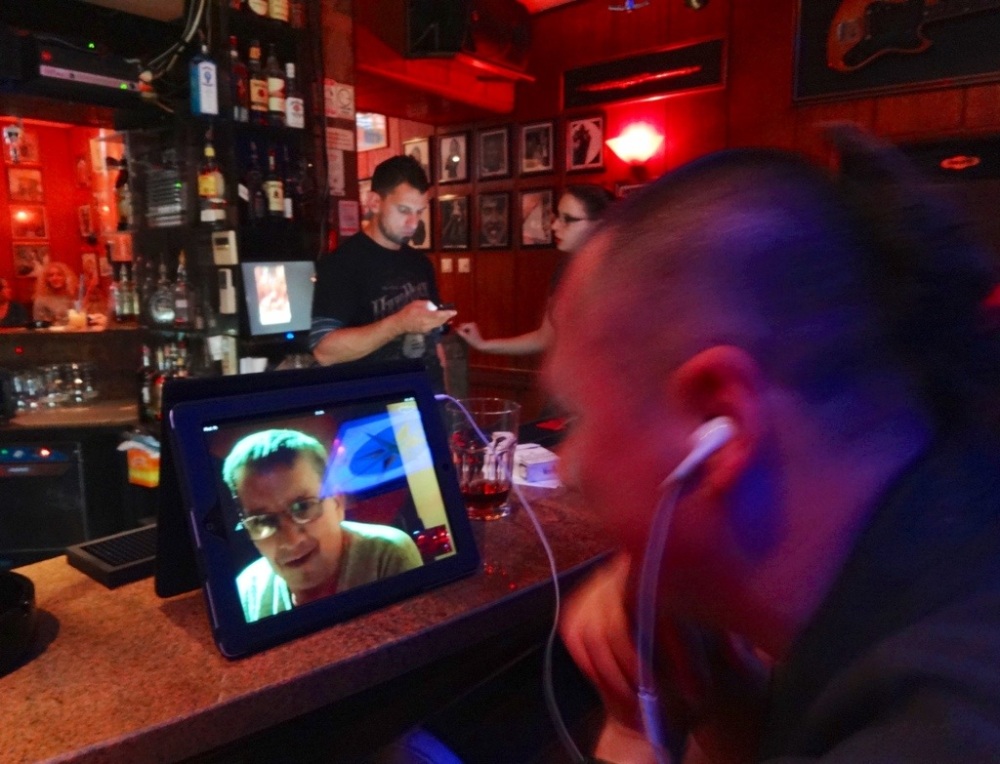 Presently, Eva decides that it’s time for shots. That’s the drink I never drink, for fear of projectile vomiting a few minutes afterwards. Except this is Croatia, and we are introduced to the delights of a honey/cognac combo. Which turns out to be rather nice.

As I exit Exit, it feels like it’s been a late night. But it’s not. 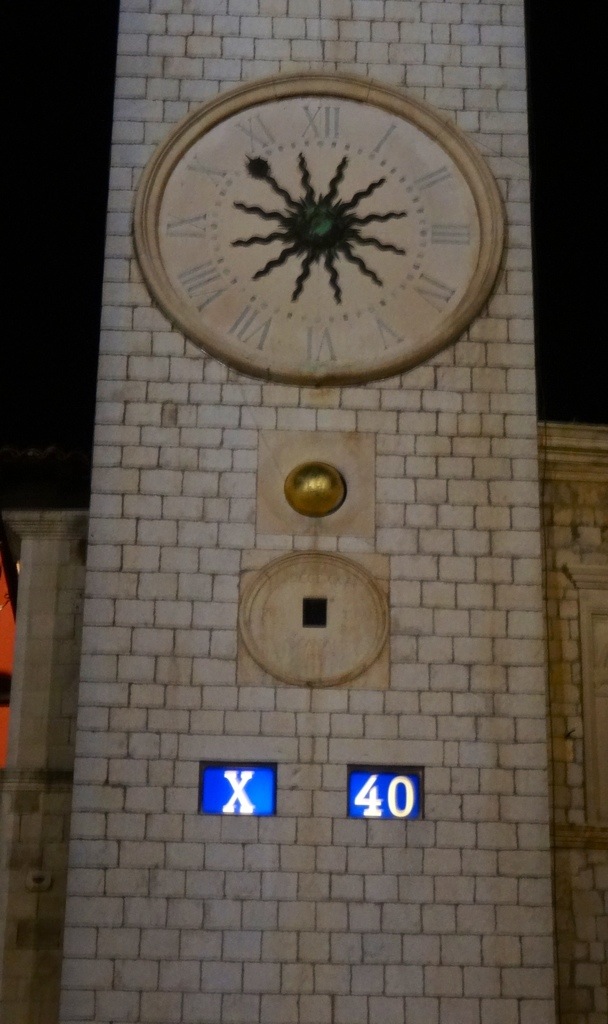 And as with the circle of life, I end up back in the Irish bar, where a local performer is murdering a few songs. Thankfully, for once, I’m not the one joining in 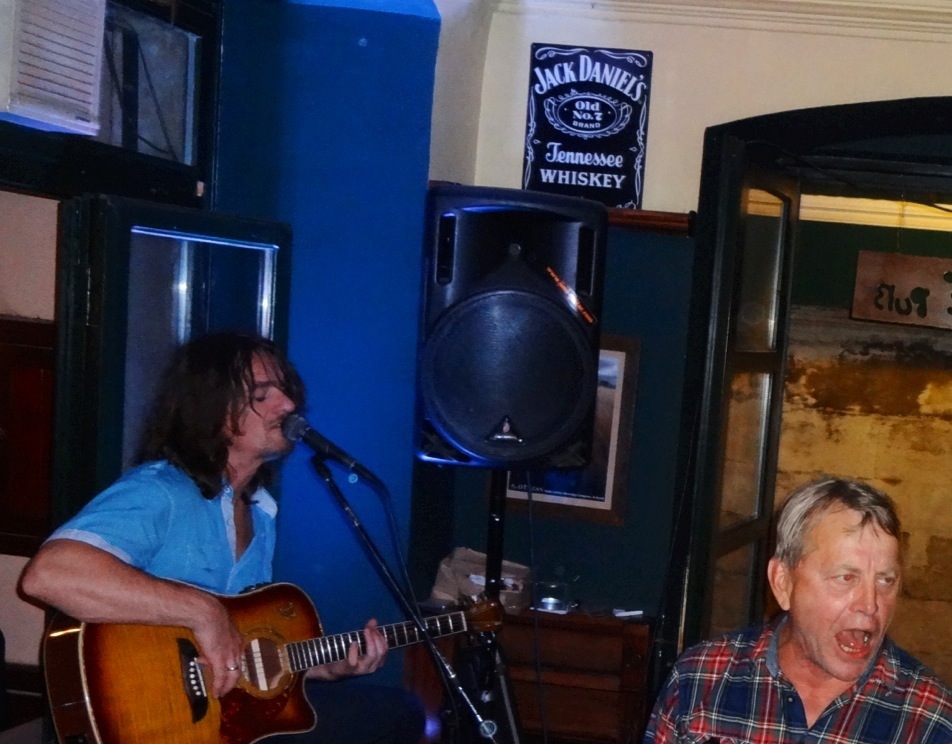 That’s more than enough for one day.