Only in America would people refer to a shopping centre as a mall. And only in Nashville could this idiot mistake a park for a shopping centre. On the map, it clearly said “Bicentennial Mall”. Thinking that this might be some sort of Robin Williams themed retail experience, I got on the free Music City circuit bus. That’s right, they run a free bus to the mall. What else could it be? 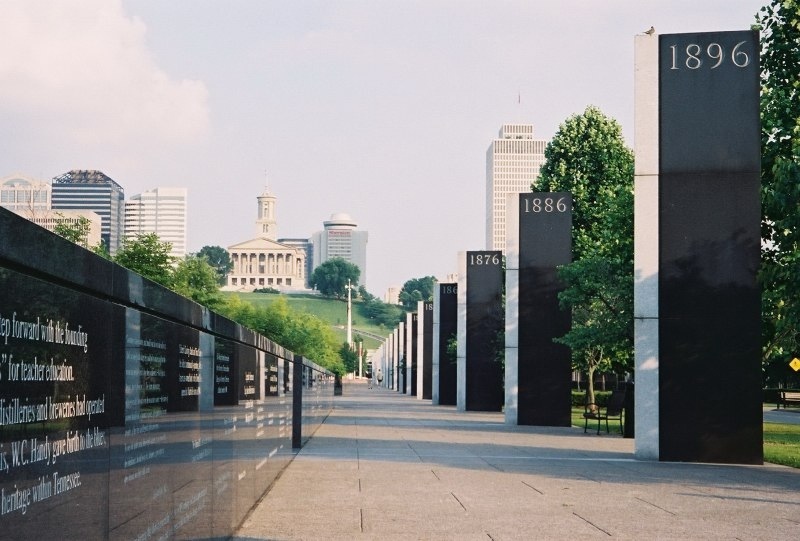 Obviously, it turns out to be a celebration of 200 years of local history. And although in this (borrowed) picture it looks nice enough, today it happens to be overcast with showers, and the place is deserted.

Thankfully, shopping is available at the nearby Nashville Farmer’s Market. Located in what looks like a former wholesale venue – with long, open sided sheds stretching narrowly up the street, there’s a big plant sale, a flea market and lots of home made food on offer. Including popcorn flavoured with cheese. It really shouldn’t work, but it does.

Nashville is built on several hills, sweeping down towards the Cumberland River. It’s not exactly easy on the feet, and in wet and windy weather, even the shops and bars along Broadway look a little old and battered.

“I like Nashville, but New Orleans is better. They take more pride in the streets,” says the man in BB King’s bar. He and his wife are in town from Portland, specifically for the music. And in some ways he’s right.

Broadway in Nashville looks a bit like modern day Wild West, which I suppose is the point. But by 5pm on a weekend it resembles a late night Saturday in any English city. Young, drunk girls struggle to cross the wide streets without almost getting run over, and by the end of happy hour everyone’s in a party mood.

Away from the honkytonks and saloons, the final night of Tin Pan South is underway. Billy and Chip Davis are joined by Michael Pyle (left) and another appearance from Stephony Smith. Just to poke fun at their own industry, Michael brings the house down with a song called “A Really, Really Small Town”, where any hint of romance is killed by a “visit from the sisters” – of the church, of course. They’re not actually related. Or maybe…

The finale of the festival – at least downtown – is at the Hard Rock Cafe, where Amy Grant stars alongside Wayne Kirkpatrick,Phil Madeira and Amy Stroup. Now remind me, ladies, whose turn is it to look at the camera tonight?