If you’re of a certain age – or a certain frame of mind – that intro will mean something to you. Forty years ago, something changed in UK radio which meant it would never be the same again. On this day in 1973, LBC launched – the country’s first commercial radio station.

In today’s world of online technology, where you can listen to pretty much any radio station in the world, it’s perhaps hard to understand just how significant then launch of LBC was. Not only did it make history by being the first legally licensed commercial station in the UK, its newsroom provided the cornerstone of speech broadcasting for the rest of the fledgling Independent Local Radio network.

And LBC was unique within that network, since it was designated as a “News and Information” station for London – as opposed to Capital, which would mix speech with music. Every radio station licensed in the UK has to have an approved format, but unlike today’s generic, bland descriptions, LBC had very specific ideas of what should go where, such as this elaborate breakfast show template (taken from Paul Easton’s archives) :

It’s been an amazing journey through those 40 years. In the early days commercial radio newsrooms were frequently hit by strikes. The National Union of Journalists ruled the roost – and everything from pay to working conditions was meticulously negotiated – often against the backdrop of national agreements.

LBC has had a range of owners during that time, and its studios have seen a parade of famous names behind their microphones : Michael Aspel, Angela Rippon and the man I started this blog with, Douglas Cameron. 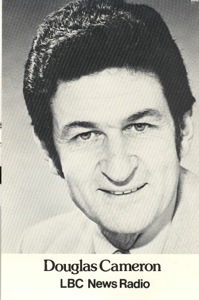 A legend in radio circles and – for thousands of listeners across the UK, the voice of breakfast news bulletins when commercial stations would take the national feed from London, followed by the local news. So it was entirely fitting – and a masterpiece of scheduling – for LBC to invite the great man back to read the 0800 news this morning. Brilliantly done.

And in many ways, it could really be a case of life beginning at 40. Over the last year, LBC had added a weekly phone in with Nick Clegg, on top of regular phone ins with London mayor Boris Johnson and shows hosted by David Mellor and Ken Livingstone. This kind of political knockabout generates genuine debates, and exclusive news stories that are often picked up by the TV networks. It’s the kind of publicity you can’t buy.

Others are far more qualified than me to tell the whole story. LBC is broadcasting a special programme tonight on its fortieth anniversary. The BBC website has produced a fine montage of ILR’s development. And David Lloyd’s blog tells a very personal tale about the early days.

Now, if you’ll excuse me – I have a newsreading voice to perfect…