There’s been much blustering this weekend about the implications of a possible Royal Charter to regulate the press in the wake of the Leveson report. Newspaper editors and their representative have lined up to denounce any state intervention in regulating the sector as the thin edge of the wedge towards censorship of free speech.

Well I’m going to exercise my right to free speech and say this.

What a load of nonsense. 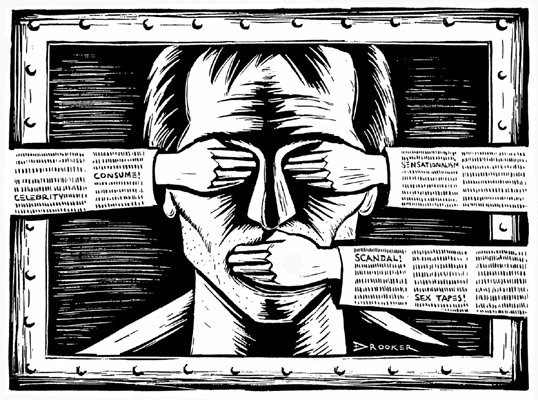 Even Ian Hislop was backing the theory that any kind of Charter approved by Parliament could ruin the chances of the Telegraph exposing another expenses scandal, or the Daily Mail fighting for justice for Stephen Lawrence’s family. One analyst went as far to suggest that oppressive regimes would seize on the British Government’s heinous intervention as an excuse for their own misdemeanours. It’s only a matter of time before someone shouts “Hitler!”

I’d like to politely point out that you have no further to look for state-sponsored regulation than your humble brothers and sisters in broadcasting.

The BBC, ITV, Sky and Commercial Radio are all governed by broadly the same rules, overseen by OFCOM and enshrined in the Brodcasting Act. Whilst the BBC has its own complaints procedure, OFCOM largely gets along without too much trouble. Where there is serious wrong doing, fines are handed out, or apologies transmitted.

There’s one OFCOM / BBC principle that should never be applied to the press : that of “due impartiality”. Newspapers should be proudly flying their political colours if they so choose. But what’s so bad about a set of guidelines – backed by Parliament – that simply asks the media to behave itself?

To my knowledge, OFCOM has never blocked any programme genuinely promoting free speech, nor has it censored a piece of investigative journanlism. The only people trying to do that are overly0cautious editors or running-scared organsations. The Broadcasting Code covers matters of taste, decency and fairness – something that some newspapers would do well to take on board from time to time.

So here’s my plan. Revise the OFCOM code to take out the impartiality clause – then apply it to the newspapers. Re-employ the current Press Complaints Commission staff in a new OFCOM department, but allow complaints to me made free of charge. Anything beyond that requires legal action – at the expense of whichever party is making the complaint. And incorporate the whole thing into a Royal Charter on a fixed term – so that Parliament could only interfere or amend once every ten years.

Any Charter need only contain broad brush principles, not the kind of interfering minutiae the newspapers would have us believe.

It’s not the first time the printed press have been up in arms about this, and it certainly won’t be the last. But the simple fact is that self regulation hasn’t worked.

I’ll get my flak jacket on…