When I was growing up, ignorance of the Irish – and downright racism – were rife. There was a common question : “Are your family from the north or the south of Ireland?”. My mate’s dad had a great answer: “We’re from the west!”

That usually fooled them. And it’s not what you say but how you say it – and none more so in the emphasis of the word “west” – say it with a large grin on your face and you’ll get the idea. The west is not just a geographical area, but a different way of life, done at a different pace. 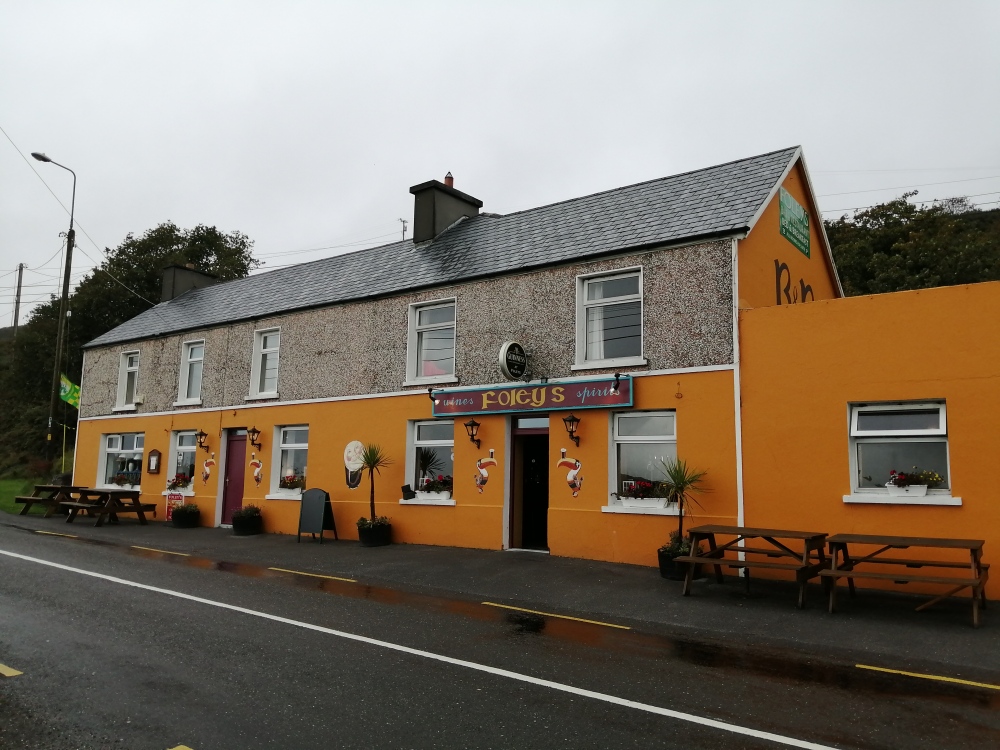 Foleys, on the Dingle Peninsula is a case in point. A rural stop off for weary travellers, usually tourists, extends a warm welcome with a couple with soft, gentle accents. Though the conversation is about a recent student party held on the nearby Inch Beach.

“Sure, Mary was at her wits end – they were from Trinity [the posh University in Dublin] – setting up a marquee with music going all night.” It’s said in a disparaging manner, but immediately followed by, “But I left the van down there after doing the drinks delivery and cycled back later, sure it was a grand night. I didn’t think it was that noisy.”

Places like Foley’s rely on passing trade, so a bunch of students isn’t and issue. And even today – with the rain still coming down – a couple of brave surfers are on the unspeakably gorgeous Inch Beach. 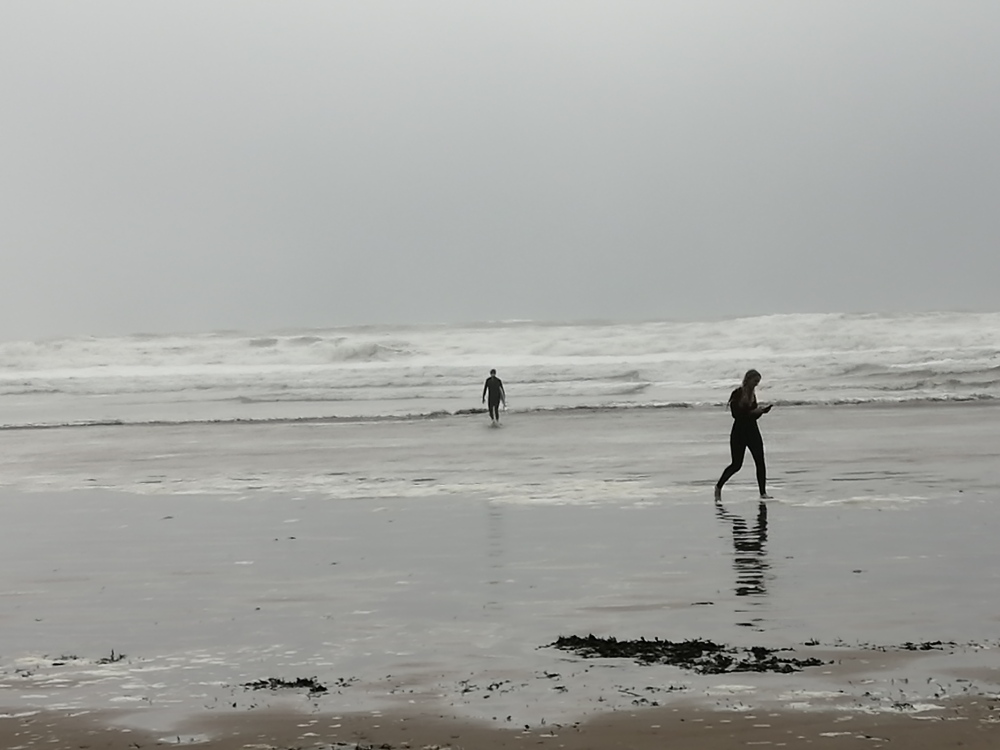 En route to Dingle, I’ve been entertained by Radio Kerry. Commercial radio came to Ireland relatively late, in 1989. But a network of pirate stations had already established themselves, and today the stations enjoy huge audience – Radio Kerry picks up a weekly listening reach of 46%, roughly twice the size of the UK’s most comparably successful stations. And it trades on localness, not least the death notices.

“Murphy, Agnes. Of Tralee. Peacefully on Friday. Reposing at her residence at six thirty this evening… with funeral mass…”

Each day, three times a day, local radio stations follow the ritual of listing those who’ve passed away. Although stations in the bigger places like Cork and Galway also do this, it’s those serving largely rural communities where the death notices are of great importance. Immediately followed by a sponsorship message and the latest hit from Ariana Grande.

Death – or preventing it – is also on display in Killarney town centre. 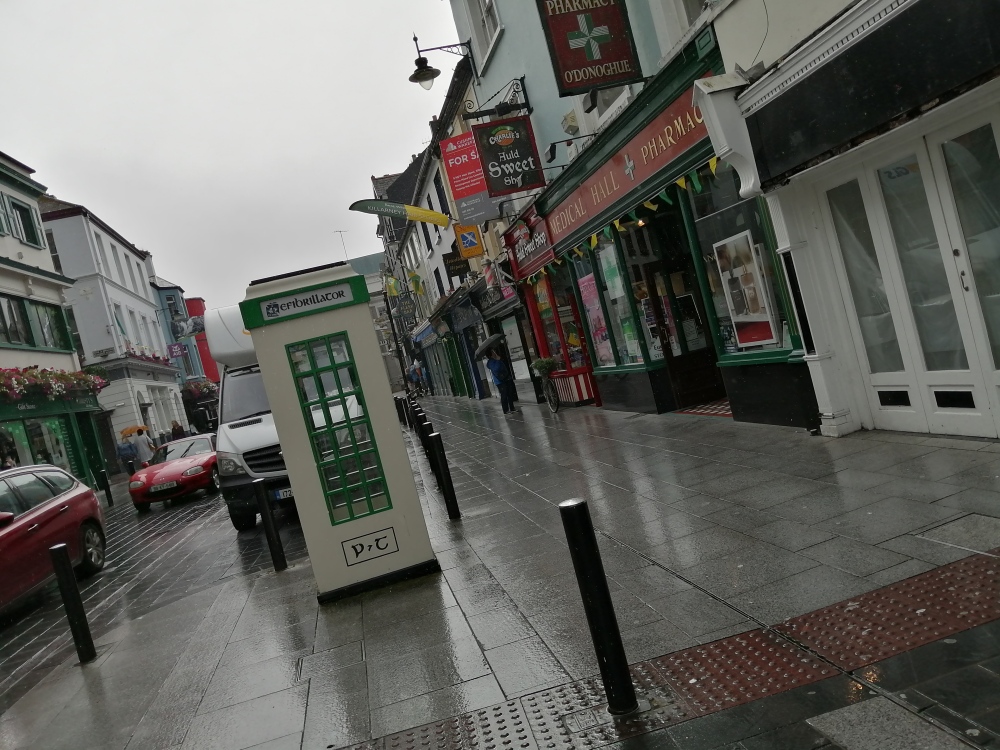 The presence of a defibrillator in a phone box – next to a pharmacy – may seem apt or ironic. Killarney itself is a pretty, bustling town – though once again the rain is putting a dampener on things.

The route here from Cork took me through the centre of the quirkily named Macroon. Its a small market town with an important connection to its rural hinterland – at the back of the local supermarket is a cattle market. On many of the roads around, farm trailers trundle along (though sometimes at greater speed than the tourists) – and somewhere close to Macroon is a major forestry enterprise, at least if the traffic is anything to go by. 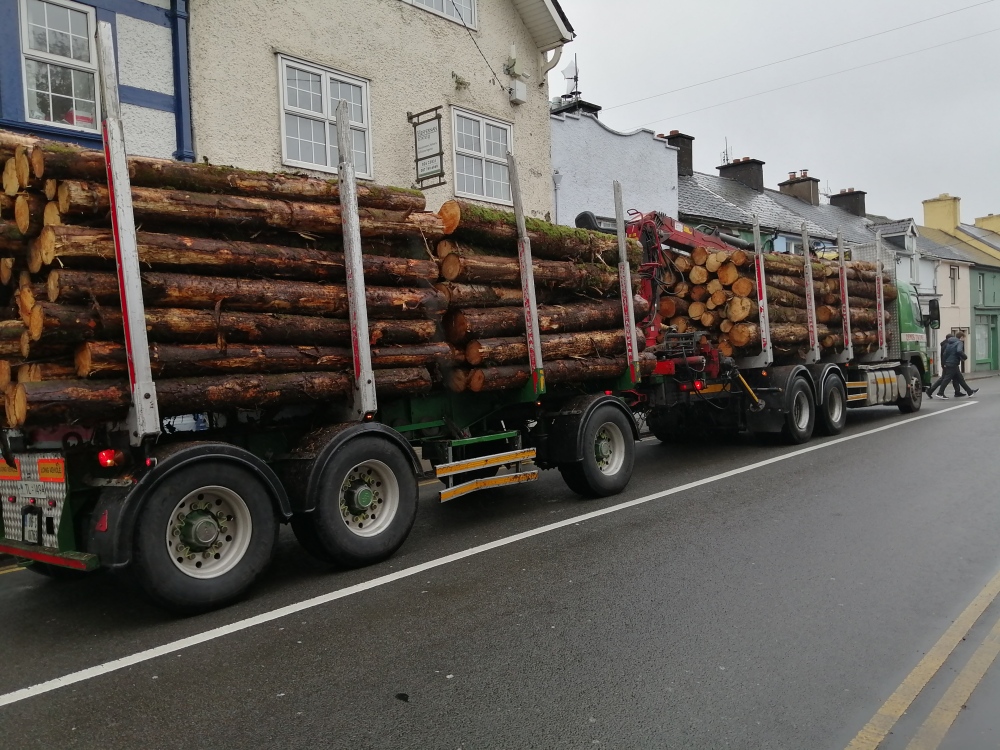 In the on of the local coffee shops – which is also a bookshop – two elderly women reminiscent of Mrs Doyle and Mrs Duneen from Father Ted are having tea and cake. And arguing over who will be paying.

More seriously, a conversation among the locals turns to an attack on two women nearby, who were mugged on a rural road. The police were actively searching for the suspects, which explains the Gardai roadblock I witnessed just a few miles before. I’d never seem this in Ireland before and just assumed it was a security check. Trusty Radio Kerry later tells me that two men had been arrested.

It’s time for a quick snack, and they don’t get much more Irish than these.

Unless you’re Irish, you won’t understand this important cultural reference. Seriously, there are crisps, and then there are Tayto crisps. Back in the day they had a reputation of tasting terrible but being the only snack you could buy in a pub. I’ll be honest, they’ve not improved all that much – but they’re a must along with a glass of red lemonade.

What, you’ve never tasted red lemonade? That’s for another day.