New York has Central Park, and while a tiny fraction of its size, Madrid’s Retiro is a (sort of) peaceful retreat from the busy city. That said, at lunchtime, the place is bustling with joggers, dog walkers, parents with small children and plenty of tourists. And while many football fans here see the Bernabeu as their sporting Mecca, the Retiro has its very own Crystal Palace.

It was built in 1887 for the Phillipines Expo – at the time the country was under Spanish colonial rule. The structure was actually designed in Bilbao, with the express intention of transporting it, piece by piece to Madrid. On almost every approach, solo musicians are busking, giving it a strange introduction as you walk towards it. The attendant on the door informs visitors that photos are allowed (a thankful concession) while selfie sticks aren’t (an equally sensible decision).

I have to admit it – I love a good train station. They can be every bit as architecturally impressive as any palace or museum, and were often built to proudly show off a city’s ambition to arriving visitors. Atocha’s historic platform hall looks suspiciously like the one at St Pancras in London. With two major exceptions. Trains don’t run in to it, and they’ve replaced high end shops with a tropical garden. 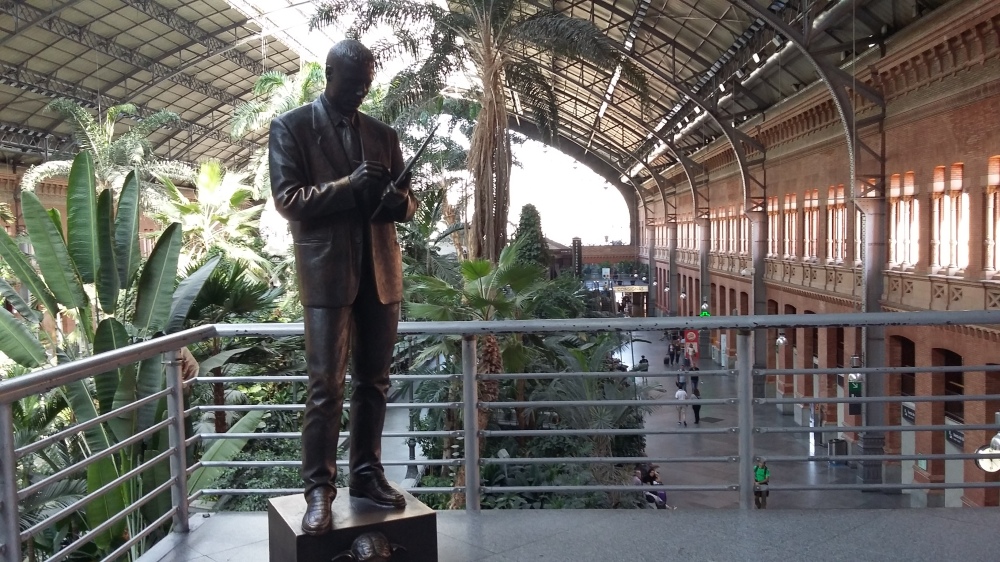 Atocha itself is also historically significant, but for all the wrong reasons. On 11th March 2004, ten almost simultaneous explosions happened on commuter trains all heading for Atocha station. It was just days before a general election and 193 people died. Protests followed, with people demanding that the Government “tell the truth” – and Spain’s two main political parties hurled blame at each other. Although attributed to Al Quaeda, no proof was ever established. A Moroccan national was charged.

Today, a monument to the victims hangs among the station. It’s discrete and difficult to find, suggesting that it’s something people here don’t like to talk about

By sharp contrast, Madrid’s Cervacerias – beer and tapas bars are the place for conversations. The one at Santa Barbara is among the best known, and helpfully has a website where you can download a menu in English. This proves especially useful as the staff are having none of this foreign nonsense on their turf. After attempting to explain that I didn’t like seafood, I was offered “the finest mussels” at least twice. I correctly navigate my order to quesos and the most impressive pork scratchings this side of Wolverhampton.

They were as big and as delicious as they look. Santa Barbara may be famed, but its staff struggled to cope with the still large crowd on its terrace at 10pm. Given these guests were paying a 10% premium for their drinks, perhaps it’s not too surprising that it took me around 15 minutes to get their attention for a second beer.

Homeward bound, and. brief stop for a final beer on a back street near the Opera. There’s football on, but Real Madrid are being pasted three nil by Sevilla. Even the controversial video referee isn’t helping, disallowing a comeback goal by Real and deeming it offside. An American student sitting behind me agrees that “it’s nit picking”. Impressed by his knowledge of the offside rule, I ask what he’s doing here. He’s from Los Angeles and teaching English “some of the time”. And the rest of the time? “Mainly drinking”.

Which is entirely appropriate, as my receipt reminds me the next morning : I’ve been drinking at La Taberna Los Angeles.