For me, one of the joys of travel is getting off the tourist trail and sampling some local life. Mixing with ordinary folk, learning about their culture and finding out what makes them tick. The great thing about Malta is that it’s a small place, so that shouldn’t be too hard, right?

Well, that might be the case if it weren’t for the fact that my choice of companions for this trip have little interest in anything to do with the place – except for who’ll be representing the country in this year’s Eurovision Song Contest. 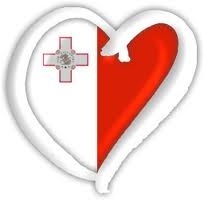 How do you make a Maltese cross? #obviouspunchline

Now I’m the first to admit that I have something of a soft spot for Eurovision. Who doesn’t? The pinnacle of my interest and involvement was covering the 1998 final in Birmingham, where I became the first person to announce on commercial radio that an Israeli trans-sexual had won the contest – and was called an “asshole” by Katrina, of the Waves fame, after trying to track her down for an interview.

In preparing for this trip, the motto of my Motley Crew – John, Franko and Phil – has been “It WILL be fine”, which to me, as a relative outsider, suggests that it probably won’t be. These guys have travelled to the furthest corners of Europe, not only attending the Grand Final (that’s the actual Eurovision Song Content to you and me), but the national finals of other countries too. Some have sat on the voting juries. They know every performer, every statistic and own larger anoraks than mine. That’s saying something.

Like many great ideas, the holiday began life in a pub. After several beers, I could think of no better place to seek a bit of winter sun than Malta – taking in the local Euro Song final. As someone else once said, what could possibly go wrong?

My Lovely Horse – setting the standard

And for the first time in many years, I’ve done virtually no research for this holiday. Somebody else has booked the apartment, someone knows exactly how the ticketing system works, and somebody else has checked out the nearest bar. So although I’ll secretly be loving every minute, I’ll also be charting some of the highlights on the blog in the coming days.

And sniggering as much as possible.