He’s interviewed some of the most famous and influential people on earth, and once got mauled by an errant emu. So when you get to interview Sir Michael Parkinson, where do you start?

In my case, back to basics. Journalism to be precise. Parky’s been in town to hand out awards for the National Council for the Training of Journalists – the one bit of our profession that’s perhaps more important now than it’s ever been. And on the eve of the Leveson report, Sir Michael is pulling no punches. 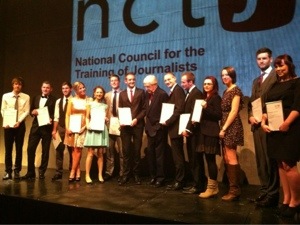 On the question of statutory regulation of the press : “I hope not but I feel that we might – and if we do then we only have ourselves to blame. We actually abused the system that was in place. And when you consider not the problems that the stars have with intrusion, but what Milly Dowler’s parents had. When you look at that sort of thing, it was a very, very unseemly mess and it needs sorting out.”

And he’s not making any apologies for poor management. “When the editors line up against statutory regulation, I hope they remember who got them there in the first place.”

I’ve often blogged about the sometimes ill-informed attacks made on our profession, but this is coming from a man who knows more than most about how journalism actually works – and the immense responsibility we have as custodians of the airwaves or the printed press.

But Parky’s also a fierce defender of broadcasting. After dinner, he takes questions from the audience – and someone asks what he thinks of the Jimmy Savile scandal. He doesn’t think there was ultimately any collusion within the BBC to hide Savile’s crimes. But he mounts a fierce attack on the other institutions involved.

“At least the BBC had a reason to employ him, as an entertainer. But what reason, pray, did Stoke Mandeville or Broadmoar have to to let him through their doors? Here was a man who’s every word was a lie to hide his real motives – to abuse young children.”

My primary reason for interviewing Sir Michael was for a series on the future of local newspapers, which is due for broadcast in the new year. You’ll have to wait for that to find out Parky’s views. But as you’d expect, they’re forthright and honest. He’s a no nonsense journalist of the best kind.

And it’s been a privilege to have been one of the few people who asked him the questions.