There are certain moments in life when you will always remember where you are when big news happened. For me, the latest crisis to hit the BBC was accompanied by cheesy disco music in a gay bar in Manchester.

“We just HAVE to go somewhere and watch the news channel,” said my mate, who also happens to work for Auntie, but conversely is no friend of Dorothy. Not in the literal sense, at least.

Ok. Enough of the riddles and puns. I’m not going to blog about George Entwistle. Or Lord Patten. Or Tim Davie.

Because, away from the microcosm of meeja high jinks today, a commercial radio station was making the headlines for attempting something that not many commercial stations do these days : investigative journalism. And it all ended up with the journalist looking like North East England’s most wanted: 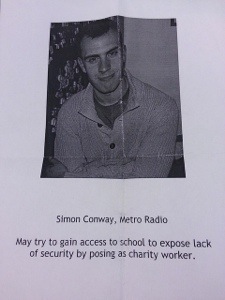 Ok. I’m going to declare an interest here. I knew about this story long before George Entwistle did.

Simon’s one of the best young talents in radio news right now. Hard working, tenacious and always looking for ways to do things differently. And that matters in the world of commercial radio news, which often consists of 90 second bulletins and – in the worst cases – companies just about staying on the right side of OFCOM’s Localness Guidelines.

You can read the background to Simon’s story here – but essentially, the idea was to test school security – by attempting to enter a school without permission.

Police said any such attempt would be deemed a criminal act. And anyone who works in the BBC would quickly recognise the mountain of paperwork and referrals that such a proposal would entail. Yet Metro’s News Editor, Justin Kings, was prepared to take a risk. And face the possible consequences.

It’s the kind of risk that the BBC may be slightly more averse to in the coming days and weeks. But the fact that detailed investigative reporting is still alive in the commercial sector should be praised.

It’s even made the headlines in the Independent.