I’m not really the suspicious type. When it comes to numbers I don’t really associate 13 with being unlucky. But it’s the 13th of the month, and I appear to have landed in Tallinn during the little-known Baltic Monsoon season. The weather today has gone from bright and sunny at Toompea Castle… 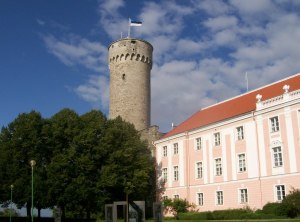 … to a downright downpour in Raekda Plats, the Town Hall Square…

Though in this weather, people watching gets a whole lot more fun. Not long before this picture was taken, I was tucking in to a rather nice lunch at one of the many restaurants around the square. Even in the pouring rain, the parasols and heaters provide a great refuge from the elements, and a good vantage points to see tourists being led round by increasingly soggy guides, attempting to sound enthusiastic.

During the infrequent sunny spells, one thing that quickly strikes me is that there’s no dominant language being spoken among the visitors. I’m not great at identifying words at the best of times – but perhaps unsurprisingly there seems to be a lot of Scandinavian – a friendly and polite tone in cafes and shops.

Which is more than might be said for the Spanish. As around a dozen of us duck for cover during another shower, a rude and noisy man walks out of the rain, refusing to acknowledge that he can lower his umbrella. he’s also more than happy to make a loud phone call whilst shaking said umbrella over the rest of us, and then proceeding to have a loud conversation with one of his countrymen right through my face. Bastardo.

Yet despite the rain, Tallinn is an exceptionally beautiful city, especially within the walls of the Old Town.

Although some of the walls need a lot of TLC.

Lunch was good, but one thing you always need on a city break is more calories, so I head outside of the Old Town to a small shopping mall for supplies. I don’t mind paying for four star comfort in a hotel but there’s no point splashing out on a the minbar when there’s a perfectly good supermarket on hand. That said, nothing matches the Old Town charm of this historic pharmacy, which also stocks modern day supplies:

And there’s nothing more charming than a nicely painted post office. Can you imagine this in the UK?

Tonight I’m planning to soak in some jazz as well as the beer at the Von Krahl bar, though on the way back to the hotel I spot another potential venue…