It’s another day for heady tourism. Although New York is a great city to walk around, you soon realise just how big it is. So it’s a subway trip downtown to the Staten Island Ferry, which prompts a flashback of last night’s trip home

It’s a tough crowd on the late night 1 Train going uptown, but he manages to collect a few dollars.

Spare dollars don’t last too long in NYC, where almost everything requires a tip. A good tip, though, is to see the Statue of Liberty from the Staten Island Ferry – which is free. Here native New Yorkers mix with hundreds of tourists for the 20 minute crossing from South Ferry. And what a view

The ferry trip also gives you a real inside into everyday lives. Listening in I can hear conversations of all kinds with thick New York accents – or the occasional bit of Spanish. Then it’s a hop back over the water to the heart of New York’s financial district. The bottom end of Broadway, close to Wall Street, demonstrates the highly charged atmosphere around here – with a smiling, charging bull

But look closely and you’ll see the tourists seem to be more interested in having their pictures taken it the rear. Yep, this bull likes to show off his bits. And that’s for another blog.

Not far away is the site of the World Trade Centre. There are a few references to 9/11, but right now the authorities are in the process of constructing a huge new venue which will combine a memorial, new businesses and a transport interchange. 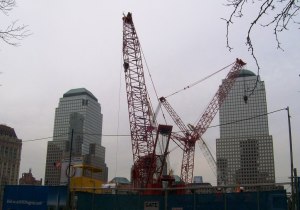 The Village in the City

It may only be a couple of blocks from Broadway, but the West Village and Greenwich could be a million miles from New York. Elegant buildings weave with bohemian neighbourhoods, where people care just as much about their pets as themselves.

Close by is Washington Square Park, next to New York University. In the centre of the park a group of performers round up some volunteers before demonstrating some amazing acrobatics.