It’s Brexit Day. Or rather, the day that was meant to be Brexit Day for the UK but turned out not to be Brexit Day. It may still have not happened by the time you read this – which, given that the Internet is a permanent record lasting for all time is a long time indeed.

Thankfully, it’s also my birthday, which does happen each year with some certainty, and after a couple of days enjoying Chicago’s thriving nightlife, a chance to blow away the cobwebs with a walk on the beach. And being not quite warm enough for Spring just yet, I virtually have the whole pace to myself.

Oak Street beach runs right alongside a main road, so although it looks peaceful enough, the sounds of the traffic is never too far away. In the warmer months this place is heaving with locals and tourists, but the Windy City is today living up to its name, with a big chill factor outside. So a better place to admire the view is from another tall tower – the John Hancock Centre. 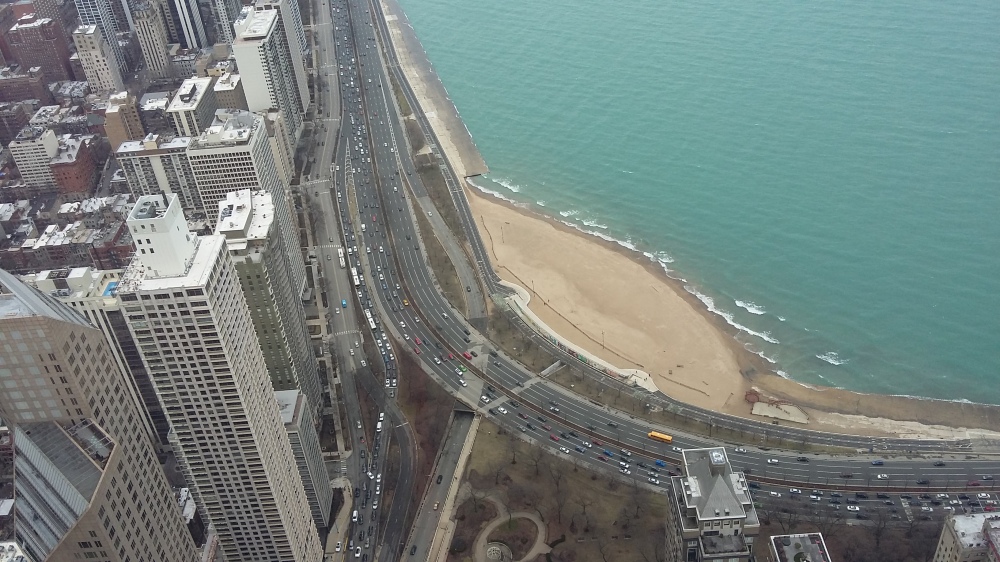 The Hancock is smaller than the Willis Tower – today we’re only on the 94th Floor. The last time I was here I made it to the 95th – a lounge and restaurant whose prices are as steep as the building, though you don’t have to pay the admission fee – so for the pricce of a pricey cocktail you get the views and a drink, best served at sunset.

Just off Oak Street is the Gold Coast district – a residential neighbourhood with some of the prettiest buildings in the city.

It may not match the grandeur of some historical areas of the US, like the Garden District of New Orleans but it’s gives you a sense of how different communities helped to build the city. The Gold Coast and nearby Old Town wer established by German settlers in the 1850s, and it’s clear to see a European influence here – right down to a VW Beetle.

All of this walking and history makes you hungry. So, continuing my celebration of all things European, a train ride takes me to the Lincoln Park district and Paddy Long’s pub. Many establishments have built up a reputation of holding special events where food and drink are paired. Cheese and Wine being the most obvious example. But if you’re coming to Paddy’s, don’t expect your vegan friends to be impressed – because here it all about beer and bacon. Lots of it.

The battered bacon strips were so nice, I forgot to take a picture, so this ones from Trip Advisor. The Lincoln Park area is full of great neighbourhood bars, including the rough and ready Delilah’s. But my evening finished back downtown, with another dose of the blues – this time at Mom’s Place.

Mom’s is another curious venue, combining two very different bars in on. The professional musicians pay in the front – and out back is near nightly karaoke. Fortunately both rooms are reasonably soundproofed so that nobody offends each other with screeching vocals, off tune melodies and lyrics that often make little sense. The karaoke can get pretty bad too.