American cities are fiercely proud of their skyscrapers. Symbols of wealth and power and – notoriously in New York – prime targets for terrorists. However, it wasn’t New York, but Chicago, which for a long time held the record for the world’s tallest. At 1,450 feet the Willis Tower (formerly the Sears Tower) was higher than the Empire State Building. And today, it’s still the place for some stunning views over the Windy City. 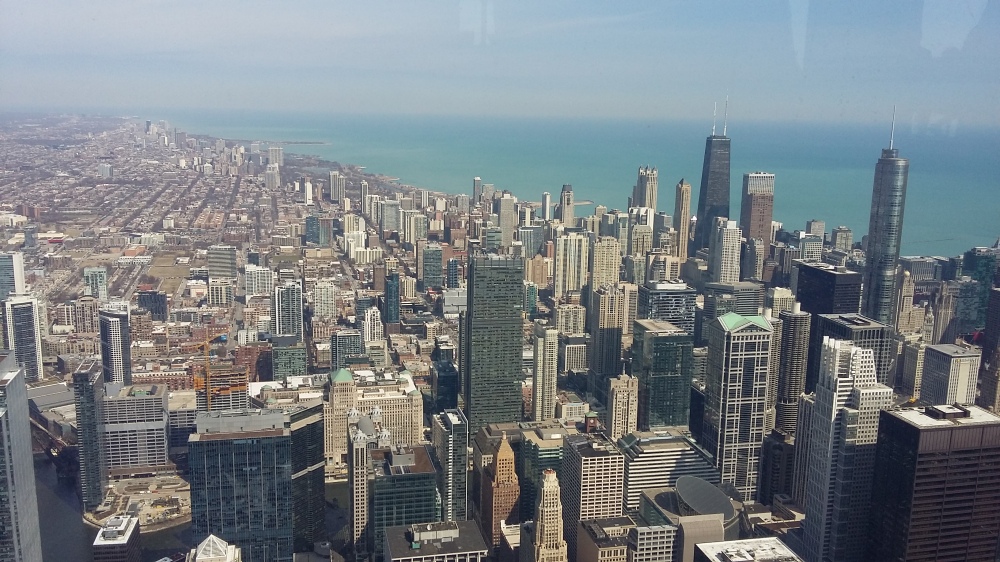 This particular view gives you an idea of where a lot of that wind comes from – the vast expanse of Lake Michigan to the east. It covers an amazing 22,400 square miles, and is 90 miles wide at its narrowest point. Getting to the top of the Willis Tower takes just over a minute, though getting to the lift takes around 30 minutes of queuing – a relatively quiet Tuesday morning. It’s a further half hour queue to get onto one of four ledges which jolt out of the 103rd floor, complete with a chance to get a photo taken. Said photos, of course, come with a fee. I don’t pay for photos at attractions, so here’s one of my own.

Back at ground level, there’s plenty of further architecture to admire. Not just glass buildings, but the ancient-yet-still-functioning girders that hold up the city’s metro elevated (El) Trains. They remain a great way of getting from area to area as a visitor, though on a dry day, much of the downtown loop area is easily walkable.

Chicago is no different from any other city in having a homelessness problem. Or, at least, a begging problem. I didn’t take a picture, but as I sat at a cafe window eating lunch, the perfectly positioned man was on the corner – not with a customary dog on a lead but a cat. Sure enough, people stopped to give him cash, food and perhaps a few words of encouragement. And ten minutes later a woman stopped, wo also appeared to be homeless. Maybe they were comparing experiences of trying to survive in the cold. She then casually swaps places with him and takes custody of the cat. It’s a change of shift, which suggests to me that they both had somewhere else to go.

I’m probably being uncharitable. But I’m on holiday, and I have some other cats to see. Two specifically, outside the Art Institute, which roar culture to you right outside the door.

Dating back to 1879, the museum takes a refreshingly liberal approach and actively encourages photography – unlike many I’ve seen in Europe which old rather sell you an expensive print of what you came to see and could have pictured yourself. Sensibly, though, it bans flash photos, selfie sticks and politely asks visitors to not use phone for making calls. All of which makes for a pleasant visit, with some impressive collections.

In the afternoon sunshine, the rest of Chicago is showing off its beautiful buildings, many of which reflected the wealth of those who built their own businesses in the city. And it’s often the simplest of products that made the most money. William Wrigley, for instance, was best known for his chewing gum – and even by the 1920s he’d sold a lot of it.

If you look closely, the central column of it reflects a stick of Doublemint. The last time I was in Chicago, many of these large buildings housed luxurious shops in their lobbies and ground floor units. But looking around today, there seem to be a lot of “retail opportunity” signs about. It may be a sign of the retail sector as a whole, though just around the corner from the Willis Tower, Amazon has opened a grocery store. Accessible to only those with a Prime subscription, it seems an odd thing to be doing in 2019. That said, if the model means a customer collecting or sending a parcel on their lunch break – and buying some food at the same time, it could be a model for other to follow.

And someone, of course, is always raking it in.