It’s 31st January 2016. Search “broadcaster” or “BBC” today and you’re more than likely to find a tribute to Sir Terry Wogan – and rightly so. But it’s also been the day when Devon has said goodbye to another radio voice who can genuinely claim the title of “legend”. 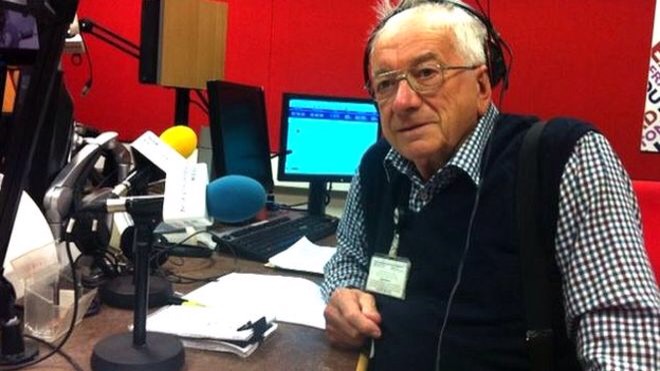 During my eleven months at Radio Devon, I had the privilege of occasionally brushing shoulders with Tony Beard. In the words of today’s news bulletins, he was as much as part of the station as the county itself. He lived, breathed and celebrated Devon in every way imaginable – but largely through his love and knowledge of the great outdoors. Tony gained the title “The Wag From Widecombe” – his home village on the edge of Dartmoor. He was in constant demand to appear at country shows, village hall talks and just about any event which required a voice.

There are many broadcasters who are described as having a “unique” on air style. But few could rightly claim that quality. Not Tony : when “Devon Requests” started on Sunday lunchtimes, you knew there really was nothing else like it on the radio.

“Us has got a postcard here – Mary says ‘Hullo, Tony and Darren – can you please play the recording of Glorious Devon as performed at the Sidmouth Folk Festival in 1978.’ Well, Mary, I didn’t think we could, but Darren’s only gone and found it!” Said recording would be followed by Nirvana – this is a request show that doesn’t discriminate. I would often be preparing for the 2pm news with the strains of Postman Pat, Madonna or The Seekers playing out.

Before the actual show, there’d be an instalment of Tony’s “Dartmoor Diary” – a simple observation of the weather, wildlife or some nugget of history. He’d also regularly appear as part of the gardening phone -in, manning the “Pest Desk” and dispensing advice on dealing with flies, bugs, rodents or foxes. All of which was interspersed with a chat about whichever cakes or biscuits the presenter had brought in.

You might suggest that this glimpse of radio is seen through rose tinted glasses. After all, is this the kind of mix that still has a place in 2016? My answer. :  a resounding yes. Tony’s show remained one of the highest rating  Sunday programmes across the whole BBC Local network.

I tuned in this lunchtime to hear Darren (Cox, Tony’s co-presenter for 17 years) – a tremble in his voice as he shared memories with listeners. It turns out that when Tony first appeared on Radio Devon, some thought it was an actor putting on a comedy Devonian accent.

And that was another quality of this great broadcaster – just like Wogan, Tony would simply be himself.