Over the weekend, I watched the new Alan Partridge film. For anyone who’s ever worked in local radio – BBC or commercial – it was a rollercoaster of belly laughs and wry smiles. Because (apart from a presenter with a gun), I’ve witnessed just about every moment of that movie. But it was the overriding plot – of a station being taken over – which has led to a real life Partridge scenario this week.

And it’s no laughing matter.

Consolidation in the radio industry is nothing new. Network more local programming – fine. Music pretty much sounds the same wherever it comes from. Merge brands, so that the most successful stay – yes. It makes perfect business sense. But mess with local news at your peril.

Of course, you’d expect a journalist to say that. There’s no evidence that local news is important to today’s net-savvy, on demand generation. Except there is.

OFCOM’s most recent report into radio listening habits suggests that 45% of listeners to commercial radio stations value local news. Perhaps unsurprisingly, that increases to more than 60% for BBC Local Radio. The same report suggests that a third of listeners are, at some point, tuning in online. So there’s no apparent correlation between online listening and a reduced desire for news.

All of this matters because this week, Global Radio has decided to close down one of its offices. Not in a small backwater that wasn’t profitable, but in Manchester. The whole of Smooth Radio’s operations – with the exception of a midlands sales office – are moving to London. The news was confirmed in this memo from the boss, Ashley Tabor. 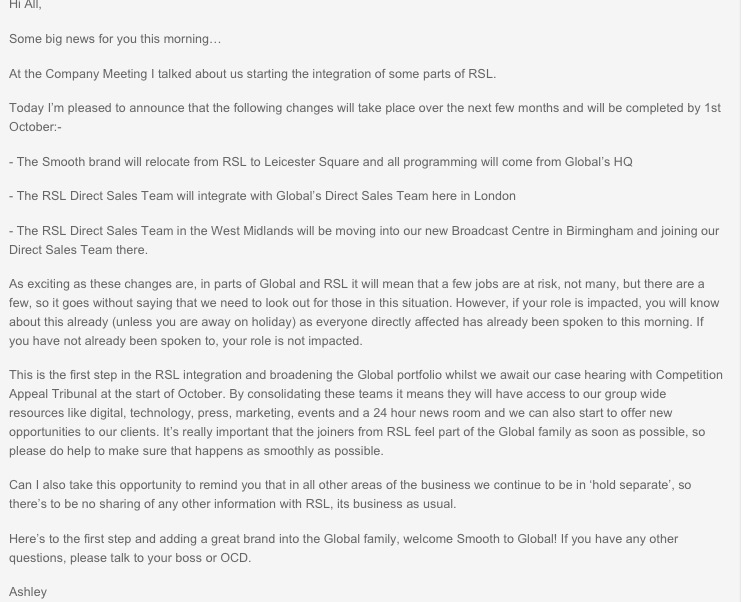 Ashley’s informal, almost pally email, hides the bigger story as far as the news goes. There’s talk of a 24 hour newsroom. A great idea. And there’s no doubt that Global’s LBC is fast building a reputation for serious and credible news – as demonstrated by the big ticket Call Clegg phone in each week.

But the role of regional news in this brave new world is far from clear. As far as Smooth is concerned, much of the regional news has been produced from a news hub in Manchester for some time. It’s largely been desk based stuff, little more than a headline service – an ironically sub standard at times when comped to Global’s flagship brands of Capital and Heart. I listened in to Capital’s East Midlands bulletin this morning to find a strong lead story on super strength booze, and good local coverage of Stuart Broad’s achievements in the Ashes. Even the BBC missed one of those stories.

And the email says nothing about the other brand which could ultimately be sold or closed altogether. The Real Radio network has several news teams which have previously won major awards for their quality, in-depth local news coverage.

So once again, commercial radio finds itself at a major crossroads, and this time it could be news that’s in the firing line. Global is still awaiting the outcome of a tribunal into its merger with Real and Smooth Radio. Beyond that, it has some serious choices to make about local news provision.

Technically you could run a high quality 24 service from Leicester Square. But it must be backed up by local newsgathering resources. At least two on the ground journalists in your big markets – like Manchester, which will soon have none – and at least one in the smaller markets. These reporters wouldn’t be burdened with delivering bulletins (which could also be presented from London), but they would be charged with providing daily peak time local content.

Off peak is another matter altogether. Over the weekend I listened to a few US radio stations. Local content on Sundays consists of weather and traffic reports inserted into syndicated programmes. News isn’t even a consideration – even on some talk stations which run a series of “best ofs”.

As a union rep, I probably shouldn’t be condoning the stripping back of resources at all. But I’m also a realist – and commercial radio is a business. However, the OFCOM research suggests that listeners still value local news – and as a regulator it should be demanding at least some public service content at breakfast and drive.

The other option is simply to leave it to the BBC Locals, which could be a factor in my own station becoming the most listened to in the market. It’s a flattering position to be in – but one that comes with responsibility. BBC Local’s tightly formatted, all speech breakfast and drive shows are unlikely to appeal to a younger audience. And healthy competition is always a good thing.

I, for one, don’t want to see that disappearing completely.

Following the comment posted by Stu, it seems that Smooth at the moment provide NO local or regional news provision, so this change – on paper – should make little difference. But what of the rest of Global’s news provision for the future? Is local news important? All views welcome