The mighty Colarado River – known as the Red River – snakes its way through the middle of Austin. And thanks to some neat design, there’s a good view from the elevator mounted on the outside of the hotel.

The sun is beating down on the city today, a welcome relief from the chilly winds that seem to have followed me around on this tour. By night, Austin rocks. By day, it’s all about history with a visit to the State Capitol building, modelled closely on its Washington counterpart.

In terms of scale, it’s a bit smaller than the one on DC. But in typical Texas style, it’s seven feet taller. And amazingly, most of its buildings are open to the public with no supervision. A quick check through security gets me into the corridors of power 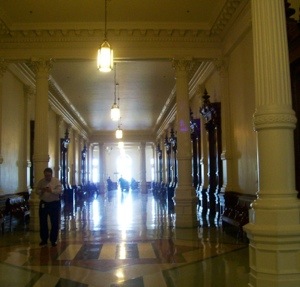 In odd-numbered years, the State Legislative bodies meet for the first part of the year. And the House of Representatives is in session, so I take a seat in the busy public gallery.

In the enormous room below, democracy is in action. Various members of the legal community are giving evidence in what sounds like a debate about the role of judges. Here, they’re elected by the public, and campaigning happens in the same way as it would for electing a politician. It’s hard to follow exactly what’s going on, but it’s a timely discussion. On the local news a District Attorney and his wife have been shot in their home right here in Texas – just a couple of weeks after his own deputy was murdered. ABC News carries the strapline “State of Alert” on it’s news. Although not everyone seems so concerned.

It could be a chat up line on Sixth Street – except Frat Girl happens to be an unruly dog being shouted at by her owner at the bus stop. The young guy with her is carrying a sizeable rucksack with a guitar strapped to the back. I hope Frat Girl is also the name of his band.

Back at the State Capitol, the grounds contain some impressive monuments charting the turbulent history of Texas. For the Mexicans who ruled this area for centuries, it was a case of taking the bull by the horns. 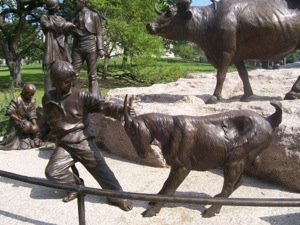 There’ve been battles aplenty, and each section of the State’s story is played out through a series of statues and memorials. 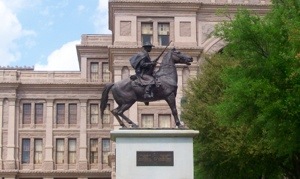 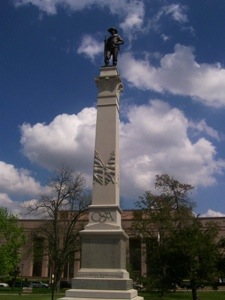