Stay downtown, meet the tourists. It’s simple enough to work out that if you really want to see what a city has to offer, you should spend some time with the locals. And a chance encounter in the Inner Sunset neighbourhood gives me a real insight into how San Francisco rolls. For starters, there’s a great sense of community, and everyone’s invited.

I stumbled across this area using the Muni, San Francisco’s metro system. It spends more time above ground than it does beneath it, snaking down residential streets where people obediently park their cars on either side of the tracks. And at the junction of Irving and Ninth Street, lies the heart of this community.

In Howard’s Cafe, Zeke introduces himself to me as a writer. But he’s more than just that. Zeke is your official 100% Older Gay Man Who’s Seen More Than His Fair Share of Life’s Ups and Downs. His business card puts it in more compact terms : “Jehovah’s Queer Witness”. He has a thousand stories about gay life in San Francisco, which is largely centred around another neighbourhood, the Castro. 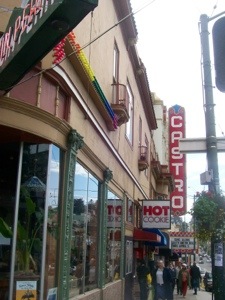 This is the centre of one of the world’s biggest and most recognised gay quarters. Bars and shops line the streets, together with an enormous sense of history. Harvey Milk, the famous activist, opened his camera store here in the 1970s. Today his name and cause live on with a Plaza named after him. And, of course, people like Zeke – who’s currently in the process of trying to get his online book published.

Now I realise that some regular visitors to the blog would have been expecting some stereotypes and less than subtle euphemisms. So allow me to give you a couple. 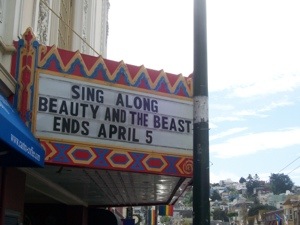 Oh, it’s so San Fran. As is the weather. Conditions here can vary within just a couple of miles, and a sunny lunchtime turns into a chilly afternoon at the end of the Muni N Line on Oceam Beach.

The Pacific Ocean, though, is a magnificent sight. This is full stuff, and on a windy afternoon few are venturing into the sea. In fact, most seem to end up at another cosy local hangout, the Java Beach cafe. The free coffee refills and home made cookies are worth the trip alone, and customers of all ages and backgrounds know it. 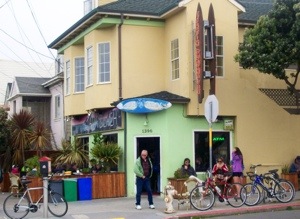 If you had to use one word to describe San Francisco, it would probably be independent. Sure, you can spend many hours and dollars at the Westfield Mall, complete with its curved escalators…

Or you could head to the Ferry Building and see the Farmers Market – where you can even order your own poem.

It’s my final evening in San Francisco. A city that first seemed a little overwhelming after the laid back nature of the South. But one that’s ultimately been full of enough surprises to tempt me back one day.