To many outsiders, the idea of slapping a colleague on the back at a works do means nothing. But this isn’t just any other slap on the back. Each year the NUJ bestows its highest accolade – the Member of Honour – on a senior member. And this year it’s the turn of John Barsby

John’s been working tirelessly in the Broadcasting sector for years. He’s represented more members than I’ve had hot dinners, and stood on more picket lines than the most determined of union convenors.

He’s also the guy who really got me involved with the NUJ, firstly persuading me to serve on the Broadcasting Industrial Council – and then to sit on the National Executive.

John’s been around the block several times, and anyone who’s seen him in a negotiating situation will know he rightly deserves this honour. And the standing ovation. 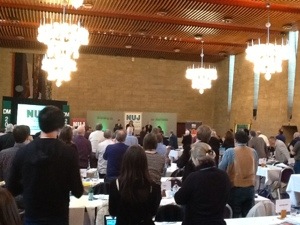