Step forward the BBC’s Business Editor Robert Peston. Known – until this past week – for two things. His exclusives on the financial crisis (although some blame him for losses they made), and his distinctive, animated voice – the result of a stammer. 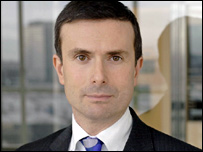 Robert Peston – questioned for being too good?

For the past week he’s been hot on the heels of the phone hacking scandal, breaking story after story. Just the kind of grass roots journalism that gives our profession a good name.

Or does it?
Well, not if you’re the Daily Mail, it would seem. In an extraordinary attack on Peston, it questions just where he’s getting all his stories from – ultimately concluding that it might have been at a garden party attended by senior News International figures, including Rebekah Brooks and James Murdoch.
Well shock horror.
The Mail goes on to point out that Peston’s attendance at said garden party was “reported in a gossip column” – it’s unclear whose, but if the paper can’t even bring itself to tell us the source, why should we believe a word of it. But furthermore :
Mr Peston is also close to Simon Greenberg, News International’s director of corporate affairs.
Well there we have it. Conclusive proof that the BBC’s Business Editor speaks to one or two people in the world of business. Who’d have thunk it?
There’s even a suggestion that Robert Peston’s disgraceful behaviour/first class journalism (delete as appropriate) might lead to criminals under investigation feeling the country and escaping justice.
There is, of course, a serious side to all of the this. The relationship between journalists and their sources is extremely fluid. There are ethical issues to consider if you come across evidence that a criminal act is or has been committed. That involves a serious chat with your own conscience, then with your Editor and – if it’s serious enough – with your Chief Exec and/or the police.
But ultimately, I think that Bob is almost certainly guilty.
Of doing a job. Quite well. Something the Mail might learn lessons from?