“So, you are from England? My first wife was from Kent. Then she screwed me over. My second wife was from Australia – she is also screwing me over. I am marrying a girl from New Zealand next month.”

It was an astonishingly frank admission from the security guard at the post office in Istanbul. All I’d done was ask him where I could by stamps for my postcards. but it was a welcome change from the usual over-friendly greeting you generally get from men who approach you in this town. This guy wasn’t after my money. 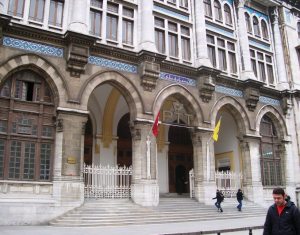 The post office was like a throwback to a lost era. On the outside a sign read “Telegraf” and inside was decked out with ornate columns, wooden panels and glass windows with various titles on them. Yet like any other post office in the world, there was only one window open, and the man at the desk seemed to be having trouble multi-tasking. A couple of girls wanted to post something but had to fill out a form. Then, a second man jumped the queue with a couple of normal looking envelopes, which seemed to take an age to stamp up. During all of this a third, concerned man came in and tried to jump the queue but changed his mind after glares from the rest of us. It’s not like Greendale here.
In fact, it’s been a bit of a bazaar day all round. What a seamless link…
The Grand Bazaar is just that. Stretching over several streets near Sultenahmet, it’s an indoor frenzy of carpets, jewellery and gifts.. And almost nothing has a price on it. Bartering is the order of the day here.
Now, I have some previous experience of this, having visited the bazaar in Marrakesh. Rule one : never make eye contact. Rile two : never enter into a conversation unless you’re serious about making a purchase. Rule three : when they say you have “insulted” them by naming a low price, you’re pretty close to what you’ll be paying.
It’s all a bit much for me, as I have no intention of buying a carpet anyway. I’m after a couple of small, cheap souvenirs. So a better option is back by the waterfront at the Egyptian Bazaar, also known as the Spice Bazaar. 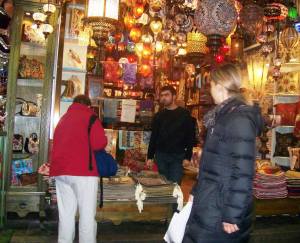 As its name suggests, this is the place to buy spices, nuts or piles of Turkish Delight. There’s also all manner of soaps, perfumes and small gifts – many at “fixed price”, which in fact, doesn’t mean fixed at all – though it does mean less bartaring – you just keep the margins tighter.